At the Market: Celery Root 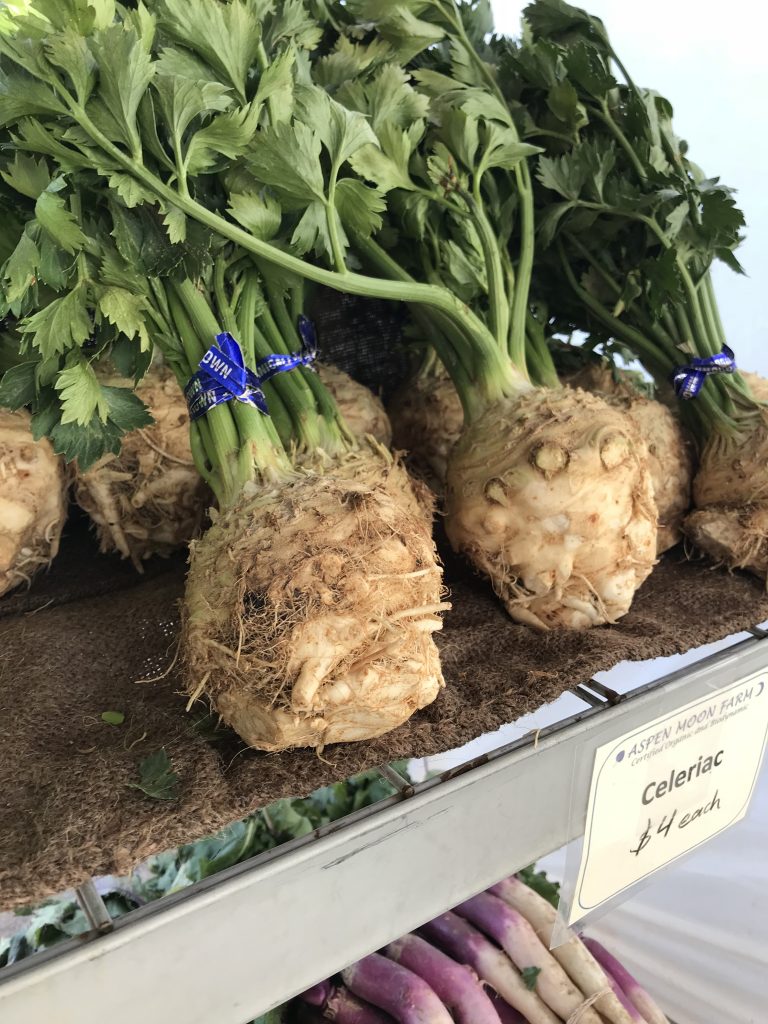 Lots of this, please: Filling stands now is the knobby, ivory-hued celery root, also called celeriac. This root vegetable possesses a slightly milder celery flavor and has some nutty tones.

The farmer says: Celeriac may not be pretty, but it certainly tastes magical. Reminiscent of Harry Potter’s mandrake root of healing, celeriac root packs a flavor punch — sans screech and spell power.

This strange vegetable may register as unique, or new, to the current generation, as it is very rarely found in grocery stores and is grown by only a handful of local farmers. However, celeriac has a history that dates back to the times of Homer’s “Odyssey” and is more common on European plates.

This cultivar to celery and cousin to carrots, parsnips and anise has been refined over the years and grows as a large, solid, knobby root with thinner stalks (think celery in reverse).

How to prepare: As an alternative to the potato, celeriac can be mashed, blanched, roasted or stewed for soup. Wash and peel it like a potato — but it may take a little extra grit to peel the roots. If you’d like to  channel some French cuisine, take this simple celery root remoulade for a spin: coarsely grate the root and mix it with a Dijon mustard, lemon juice and add some salt and pepper. You can even add in an apple if you’d like. This remoulade is a common dish in Europe.

Goes with: Celeriac pairs well with all root vegetables, like onion, potatoes, turnips, carrots and parsnips, as well as apples, bacon, leeks and cauliflower.

How to store it: If kept in the proper storage conditions, celeriac can be stored for up to three to four months. Remove the foliage, leave the root intact and unwashed. Pack in damp sand and store in a cool, dark place. The sand will help keep the storing temperature consistent and will help regulate the humidity. If you plan on consuming within a week, you can store in the refrigerator in a perforated bag.

Good to know: This list represents a general overview of the week’s harvest, not every item that is being produced locally. Some farms do not grow or have ready some items on the list.

Pickling directions: Bring pickling ingredients to a boil and pour over celeriac. Cover for one day. Will keep for a long time under refrigeration.

“The elderflower vinegar we make in house from fresh elderflower but can easily and quite nicely be made from dried elderflower. I love going to Rebecca’s apothecary here in Boulder for it,”  Arcana chef Samuel McCandless said.

Vinaigrette directions: Take a cup of finest quality white wine vinegar (Arcana uses Volpaia from Chianti in Italy) with 1 tablespoon dried elderflower. Heat vinegar. As it’s begins to boil, mix in the elderflower. Stir and cover for at least a day.

For the vinagrette, whisk together vinegar, salt and sugar. Slowly drizzle in the olive oil.

“It’s supposed to be a broken and refreshing vinaigrette highlighting the quality of ingredients used,” McCandless said. “Just shake or whisk before using to distribute properly.”

Dress greens, apples and celeriac with elderflower dressing and sprinkle with toma cheese.

“I like to have a salad on the menu that is crisp and refreshing at all times,” McCandless said. “One that virtually accommodates any guest (minus the cheese, it’s vegan). For the autumn season we are featuring Honey Crisp apples, arugula, gem lettuce, pickled celeriac, toma cheese and a vinaigrette made from elderflower preserved in vinegar.”